Don’t Trust, But Verify – Protect Yourself From Internet Crime 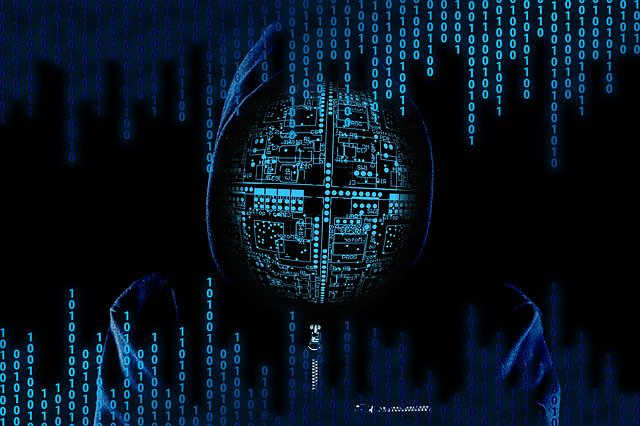 You may have heard the quote, “Trust, but verify,” (made famous by Ronald Reagan), but based on the information in the FBI Internet Crime Complaint Center’s 2019 Internet Crime Report, you’d do better to verify first. According to the FBI, 2019 had both the highest number of complaints and the highest financial losses since the IC3’s beginning in 2000 – 467,361 reported complaints and over $3.5 billion lost.

Internet Crime – Where The Money Is

With financial losses due to internet crime at the highest levels ever, what are the areas where fraudsters are causing the most damage?

Nearly half the losses reported were due to Business Email Compromise (BEC) or Email Account Compromise (EAC).  This is a scam in which a cyber criminal hacks or spoofs a legitimate email account and convinces the recipient of the email to transfer funds to a fraudulent location.

For example, consider this BEC fraud attempt, in which First Business Bank received an email from the business email address of the CEO of a business client, requesting a $15,850.00 wire transfer.  The bank employee emailed a blank wire request form, and received a return email with the completed form, including the CEO’s matching signature.  The fraud was discovered when the wire desk did additional authentication by calling the client’s phone number of record.

Unfortunately, a woman in Spokane was not so lucky when she fell victim to EAC during the process of buying her dream home.  A 75 year old woman lost her life savings of almost $100,000 when she followed emailed wire transfer instructions that appeared to be from her escrow officer.  Sandra Lee lost her money and her home, and her only consolation is that the FBI was able to track down one perpetrator with the report and evidence she provided.

Sadly, Lee was also in the age group that loses the most to fraudsters – those over 60.  These internet criminals prey on those over 60, since they are believed to have financial resources, as well as being more trusting and less tech savvy.

Elder Fraud, defined as a financial fraud which targets or disproportionately affects people over the age of 60, is a growing problem.  According to the statistics in the report, this age group is the most targeted and the group which loses the most to internet crime. 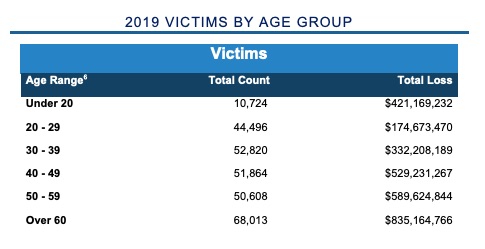 Those over 60 are also the most victimized by another growing problem, Tech Support Fraud.  This is a scam in which a criminal pretends to be a customer service or support technician in order to defraud a victim.  The infamous computer pop-up claiming “your computer is infected by a virus” is one example, as are calls, texts, or emails purporting to be from a well-known company such as Apple or Microsoft, claiming to have discovered a problem with your system or account and offering to “help” you resolve it.  While not the most lucrative or most prevalent scheme, losses due to Tech Support Fraud increased 40 percent in 2019, and the majority of victims were in the over 60 age group.

While BEC/EAC accounts for the majority of financial losses, it’s not the most prevalent scheme.  The most common internet crime type by far, with 114,702 reported victims, is Phishing/Vishing/Smishing/Pharming. 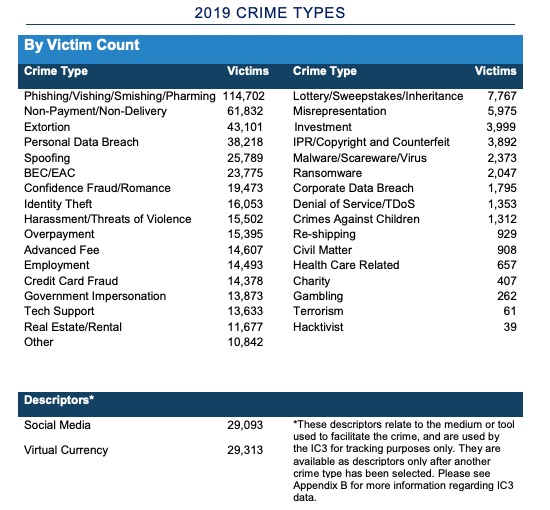 Phishing, vishing, and smishing involve unsolicited emails, phone calls, or text messages from criminals pretending to be a legitimate company or even a friend, and asking for login credentials or personal information.  Pharming is a tactic which uses a fake website pretending to be a legitimate company’s website, set up for the purpose of obtaining personal or financial information.

For example, you may get an email, phone call, or text purporting to be from your bank, telling you that your account has been compromised and asking you for personal information to confirm your identity.  Or you may search for something online and find yourself on a fraudulent site which collects your credit card information.

How Can You Protect Yourself From Internet Crime?

With both victims and losses from internet crime at an all-time high, what can you do to protect yourself?

We can no longer “trust, but verify” – the best preventive measure is to verify first.  The Chief of IC3, Donna Gregory, cautions that internet crime is becoming increasingly sophisticated, and she recommends we make a practice of double-checking everything.

Gregory advises, “In the same way your bank and online accounts have started to require two-factor authentication, apply that to your life. Verify requests in person or by phone, double-check web and email addresses, and don’t follow the links provided in any messages.”

The IC3 report includes some appalling numbers on victims and losses due to internet crime, but it’s likely this is only the tip of the iceberg.  Many victims don’t report these crimes, either because they are embarrassed or they aren’t aware of how to do so.

If you’re a victim of internet crime, report the crime to the IC3.  With timely reporting, the FBI has a chance of stopping a fraudulent transaction and recovering the money.  And the more information you can provide, the better it helps the FBI combat the criminals.  Matt Gorham, assistant director of the FBI’s Cyber Division, encourages everyone to report internet crime, as “It is through these efforts we hope to build a safer and more secure cyber landscape.”